Where Did All the Plasma Manufactures Go?

Or, more to the point, how do we keep our plasma projects running when no one seems to support them anymore?

To be clear, we're not talking about the large plasma TV in your basement. We're talking about the plasma display that for many years was the industry standard for electronic instruments. First, a little primer on how we got into this plasma problem.

When plasma screen technology arrived, it was a natural fit for the aerospace and defense industries, along with a few others. Plasma was rugged. It could be used to fit into small spaces. It was orange and monochrome and it changed how we could design our projects.

Plasma brought us the first infrared touch screens way back in the 1980s. Infrared led to acoustic wave touchscreens. The clumsier among us loved the acoustic wave technology because our dropped pencils no longer ran the risk of triggering a button on the display.

For many years, the ubiquitous orange text display held advantage over the newly-emerging LCD technology. Plasma screens started to come in full color. They were lighter than CRT displays (cathode ray tube), the other common display screen of the time. They were thin and could scale to large sizes. Through the early 2000s, plasma ruled and many aerospace, military and other projects were designed with this cutting-edge technology of the time. Plasma manufacturing grew.

All Good Plasma Things Come to An End…

Meanwhile, LCD was offering more responsive displays, with clearer images and little-to-no flickering. LCD rapidly achieved display sizes that, previously, only plasma could accommodate. And if a single LCD display couldn't be manufactured large enough, individual displays with very narrow frame borders could be arranged side-by-side to create a single canvas. With this feature, LCD screens could be made into infinite size configurations.

By the mid-2010s, LCD had surpassed plasma as the display of choice. 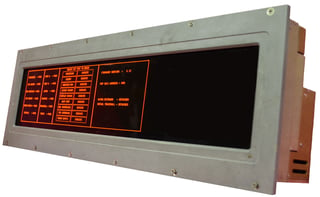 If your project was built during the boom of plasma, you might have grown frustrated in the decline of plasma manufacturing. You understand why it declined, but without plasma manufacturers, what do you do with these enormous plasma-based projects that now need repairs or parts? Let's be honest. You can't find parts, let alone someone who will repair your plasma screens.

"I just need one little widget and I could fix this myself," you say, as you search for someone, anyone, who can save you the headache and cost of replacing the whole project.

Are you at your wit's end yet? Step back from the LCD-lit edge, friends. Levison Enterprises has another way.

If you've been around for a while, you know that the technology running today's industries is a mixture of old and new. You hang on to your equipment as long as possible, even if it means occasionally creating something of a Frankenstein. With Levison Enterprises, you won't need to scrap your plasma screens, or their projects, just yet. In some cases Levison Enterprises has the ability to upgrade or replace your existing plasma displays, making sure your project performs exactly the same, or even better, than previously.

We have experience designing and manufacturing form, fit and function LCD replacements for some outdated plasma parts directly to where they are needed and get you back in business. Reverse Engineering In some cases, reverse engineering your project may be the way to go, potentially replacing outdated plasma parts with LCDs. This option gives you a streamlined solution that works exactly the same or better than your existing project.

Levison Enterprises maintains our quality certifications - AS9100C, ITAR, & ISO9001 - and also has an independent auditing process that oversees our processes ensuring your product is built with the qualifications and standards you are looking for in an electronic contract manufacturer. We have experience in handling multiple and single aspects of your build, assembly, or repair. Contact us today to discuss options for your outdated plasma displays.